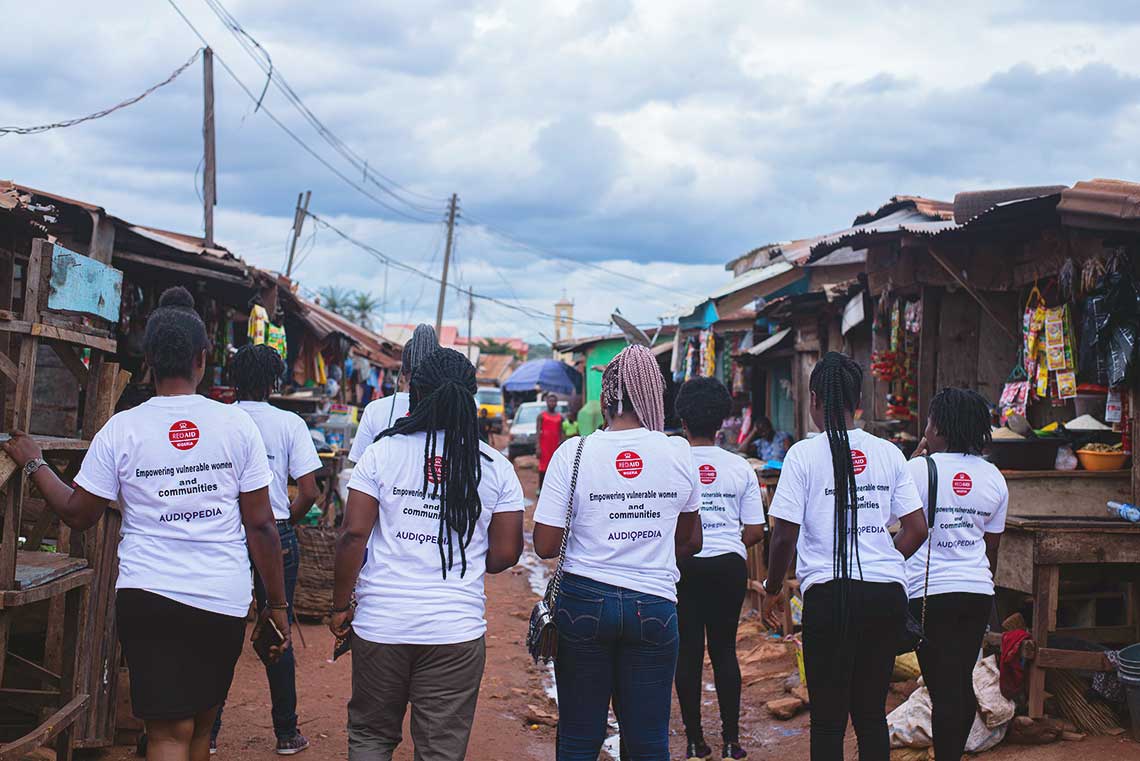 Neglected tropical Diseases (NTDs) and TB continue to be diseases of public health importance in Nigeria.  While progress has been made in their control, many problems persist. This three-year project, which is co-funded by DAHW headquarters Germany and RedAid Nigeria, seeks to provide comprehensive support in an integrated manner for control of skin NTDs (especially leprosy and BU) using innovative and cost-effective strategies. It also seeks to continue bridging gaps in the country’s TB response as well as providing general programmatic support to the national programmes (NTBLCP and NTD). Other initiatives include One Health and Community-based Inclusive development. The Project area consists of a total of 11 states in the South-East and the South-South regions of Nigeria including Abia, Anambra, Ebonyi, Enugu, Imo, Akwa-Ibom, Bayelsa, Cross River, Delta, Edo and Rivers States. The project activities are geared towards:

2. Improving morbidity management during Leprosy and BU treatment  by supplying  prednisolone for the treatment of leprosy reaction for 1250 persons ,provision of specialized footwear for 900 persons affected by Leprosy, training of LGA supervisors in 11 states to manage complications of leprosy and BU, contributing to improving basic equipment/infrastructure in 3 referral facilities, development and deployment of digital tools software for the management of leprosy and BU, Provision of rehabilitative surgery for 150 patients requiring it (Leprosy, BU and LF) and provision of assistive devices for 60 patients requiring them

l  Supporting the training of 9 new programme managers and 30 LGTBLS at NTBLTC Zaria.

l  Organizing a 5-day residential training for 30 laboratory workers from the 11 project states,

l   Conducting a 3-day Supportive supervision by DAHW/RedAid medical advisers, lab advisers and the M&E team in the 11 states.

Catalyzing improvements in DRTB Care in Nigeria: A sustainable patient-centered approach.
The project is being implemented in 2 states of Southern Nigeria, namely, Akwa Ibom and Lagos States.

The project “Enhancing Access to Health Education via Audiopedia” was awarded to our organization as part of the EU/BMZ #SmartDevopmentHack at bridging the health and development information gap among illiterate women and girls in Nigeria through the use of smartphones to access audio messages. Its implementation comprises two stages:

The pilot project which started in April 2021 and ended in December 2021 targeted 400 Women and girls living in Ngenevu community and other slums, who are categorized into illiterate and semi-literate groups.

Twenty Community Volunteers from these communities were engaged and trained on basic Audiopedia skills, as well as, skills in data collection and participant engagement. The CVs were assigned to the different groups.

The 400 women and girls, were purposively selected based on the following criteria; participants must be illiterate or semi-illiterate residents in Ngenevu community and the other slums and must own a smartphone or feature phone (WhatsApp enable or memory card enable). They were divided into two intervention groups of 200 women and girls each through a simple random technique. However, there was a control group of 100 women and girls who were selected from another community (Iva-Valley) with similar characteristics.   The groups comprise the following:

A baseline study was carried out on their knowledge, attitude, and practices towards health and development (e.g. GBV, Maternal health, WASH, Covid-19, social-economic, and women empowerment schemes) issues.

Audio messages on health and development (e.g. GBV, Maternal health, WASH, Covid-19, social-economic and women empowerment schemes) issues were uploaded into the selected mediums (WhatsApp and Memory card). Furthermore, these messages were shared via WhatsApp and external memory cards to the participants’ devices. During the bi-monthly engagement of the participants, the CVs update the mobile phones of the women and girls in group 2 with audio messages via the memory card while group 1 was via WhatsApp. For the purpose of the pilot project, these audio files were stored on RedAid Nigeria’s backend and on the Audiopedia web and shared with the participants in groups 1 and 2. These audio messages that were originally in English were translated and voiced into the local dialect by student volunteers from the University of Nigeria Nsukka. The role of the CVs for group 1 was to teach and guide them on how to access and use WhatsApp. For the control group (Group_0) there was zero-intervention.

The indirect beneficiaries that were targeted for the pilot in Ngenevu were over 2,300 households with an average of 5 persons in each household, estimated to be over 11,500 persons. Advocacy and sensitization visit for men was also carried out in the 3 communities, and radio jingles on Gender-based violence and maternal health was also part of the intervention.

By the end of the intervention which lasted for eight weeks, a post-intervention assessment was carried out and after statistical analysis, it was evident that both media were effective for audio message dissemination as both groups had a reasonable percentage increase in knowledge.

Phase II titled Mainstreaming Audiopedia as a tool to improve knowledge and access to health and development information in Nigeria aims at Contributing to the attainment of SDGs 3, 4, and 5 by promoting access to health information and information on other development services among women and girls in Nigeria through the use of various audio enabling devices to access audio messages. These health messages were translated and voiced to other major Nigerian languages which are Hausa, Yoruba, and Pidgin to reach the vast majority of the population who are excluded by the traditional means of information dissemination (print media).

From these 10 selected states which were selected from Northcentral, Southwest, Southeast, and South-South, the project focuses on 12 Local Government Areas (LGAs) per State. These LGAs were selected based on the following criteria:

At the LGAs level, each LGA Supervisor (primary Audiopedia Ambassadors) is entitled to oversee 20 Healthcare facility Staff. After their training, they stepped down the training to their various healthcare facilities for implementation.

Hence, the project is targeting 2400 healthcare facilities at the LGA level for adoption and intervention. An output-based reward system has been put in place for secondary ambassadors to encourage them to reach as many illiterate women and girls as possible. a massive radio and social media campaign will also be adopted in achieving the project aims. The project is due to end by November 2022.

Improving Mental Health and Quality of Life of Persons affected by Leprosy or Buruli ulcer in Nigeria. It is being implemented in six states; Delta, Cross-Rivers, Bayelsa, Ebonyi, Anambra and Akwa-Ibom.

Transforming the prevention and treatment of leprosy and Bulli ulcers in low and middle income countries. The research covers Ebonyi, Cross-Rivers, Anambra, Abia, Ondo and Ogun States in Nigeria.

a) WP1: INSTIL :This study aims to improve self-care in the Community for patients who are at risk of recurring leprosy ulcers.

b) WP2: HABU: This study has 2 components (Retrospective and Prospective). This project assess the health needs of Buruli Ulcer patients

2) Feasibility Study 2: Scoping review of the role of traditional healers in the management of Leprosy and Buruli ulcers.

Towards equitable NTD service delivery and disability-inclusion for the control of Onchocerciasis and Lymphatic filariasis in hard-to-reach areas of Enugu state Nigeria: Implementation research.

One billion people are affected by Neglected tropical diseases (NTDs)

One billion people (15%) of the global population has a disability

Therefore, it is impossible to achieve the global targets for the control and elimination of NTDs without concrete measures for disability inclusion.

Leprosy post-exposure prophylaxis (PEP) is piloted in Nigeria across 6 States: Bauchi, Cross River, Ebonyi, Jigawa, Kebbi and Niger between 2020 and 2023.

Combating Buruli Ulcer and Selected Endemic Skin-NTDs In Nigeria-An Integrated Approach. This project aims to contribute to improved health and welfare of the Nigerian population by reducing the burden of CM-NTDs in the country.it is been piloted in 14 states: Abia,Akwa-Ibom,Anambra,Bayelsa,Cross-Rivers,Delta,Ebonyi,Edo,Enugu,Imo,Ogun,Ondo,Osun and rivers.

Mitigation of low TB case notification in selected LGAs of Delta State in contribution to KNCV, NTBLCP and USAID efforts

It aims to explore the socioeconomic situation of community of persons affected by leprosy and their family members in southern Nigeria. ( Akwa-Ibom, Cross-Rivers, Ebonyi, Enugu, Ondo, Ogun).

This Intervention study seeks to assess the impact of audio-delivered and written health education on perception of leprosy among community members in one northern and one southern state in Nigeria. It is carried out in three LGAs within each selected state; Cross-Rivers (Boki, Calaba-South and Obubra) and Taraba State (Jalingo, Yorro and Zing).

The expansion of TB services (Treatment and referral services) in Global Fund Supported Tuberculosis Grant in Nigeria. It is being implemented in Abia, Akwa-Ibom, Anambra, Bayelsa, Cross-Rivers, Delta, Ebonyi, Edo, Enugu and Imo